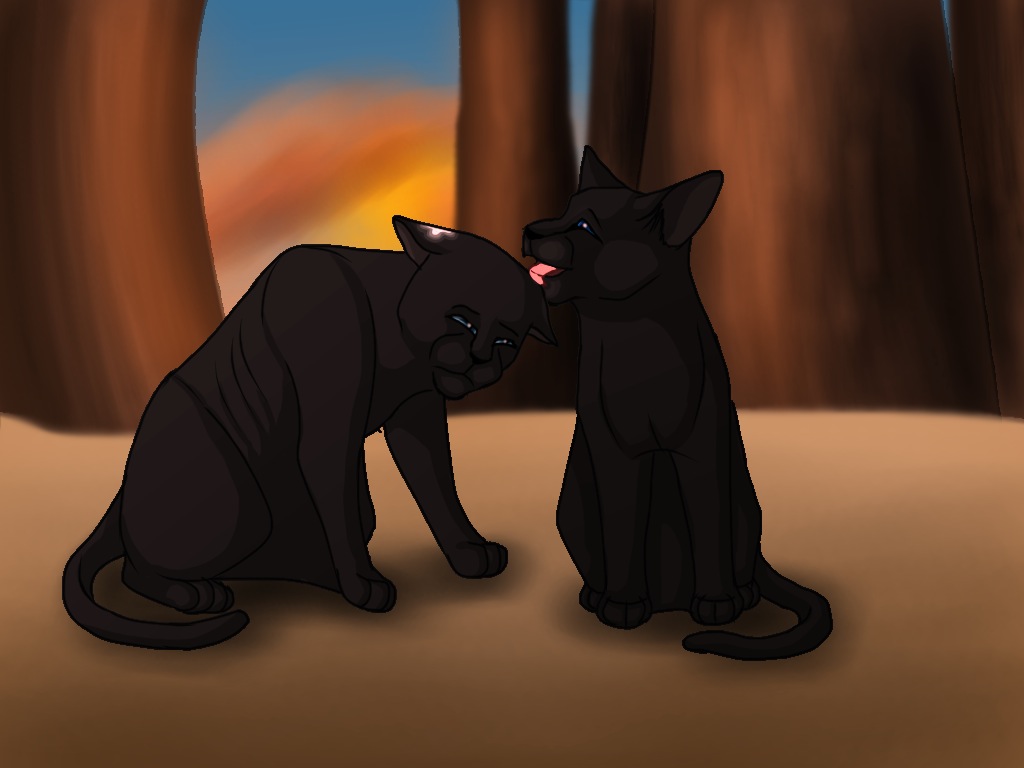 Left.
Right.
Left.
Tail lashing, I paced outside the medicine den. The groans of agony made me wince, and I tried to ignore the pulsing of my head.
Left.
Right.
Left.
I stopped. Pacing was only making my headache worse. Gritting my teeth, I lay down on the cool surface of the floor.
Everything is fine. I told myself, closing my eyes.
Sandykit hasn’t gone missing.
This is all just a dream.
Everything is okay.
I’m going to flick my tail three times,
and I am going to wake up.
…
I opened my eyes. Another wail split my ears.
Stifling the urge to scream, I skulked to my den, looking for a comfortable place to sleep.
“Gosh, //#REDACTED#\\, when did you turn into an elder?” I chuckled at my useless attempt to block out the screams echoing into the cave.
I should’ve known moss nests were uncomfortable, I grumbled to myself, attempting to get warm in my makeshift creation. I closed my eyes, trying to rest.
…
I sighed.
Sleep was useless.
It was ALL useless, I realised as I stood up shakily, moss still clinging to my pelt. If we were going home, we would have done it by now, surely?

Shaking my head to clear it, I found myself padding restlessly into the clearing. Tension chilled the air, and I could feel my clanmates hunger as I paced through the grounds. The hopeful pieces of prey caught yesterday were gone, and judging by the expressions of the senior warriors, it looked like they had been fed to Minnie and the kits. I turned my attention to the group of distressed cats swarming around the Highledge.
“Where’s Sandykit?” came a loud, terrified wail.
“No one knows.” Another voice muttered impatiently.
“Well, why isn’t anyone sending out search patrols?”
“Where’s Cakestar?”
“Why isn’t she sorting this out?”
“What’s wrong with Dawnmist?”
“What do you mean, what’s wrong with Dawnmist?”
“Why is she always out picking herbs with Hazelburrow?”
Cinnamonpaw emerged from the medicine den, a blushing heat emanating from her pelt.
She knows something. I narrowed my eyes. Should I ask her, or stay out of it?
“Everything is fine!”
Cakestar’s wheezing mew stopped my thoughts, and everyone froze as our leader staggered up the Highledge. We could all see her sides heaving, and her yellow eyes were shaking uncontrollably.
“Calm down BlogC-“
A loud cough silenced her and her body convulsed.
She staggered.
Suddenly, we ran.
I thought it was instinct at the time, but looking back, I’m sure it was pure loyalty that caused every cat from BlogClan to race to her aid. Like a tidal wave, we surged up the steps, ready to help our clanmate.
Copperclaw got there first.
“Hush, Kate.” I caught her murmur as she steadied her leader. “You don’t want to worry your clanmates.”

“Yes,” she murmured resignedly. “I suppose you’re right.”
We stood motionless as Cakestar leaned on her deputy’s shoulder, and they hobbled to the medicine den, out of sight.
I blinked, and everyone, seeming to realise how awkward they looked clinging onto the ravine overlooking the Highledge, shuffled back down into the clearing.
No one spoke when Rainsong and Kat leapt up onto the ledge.
“Now is not the time for fighting.” Kat announced, her tail flicking side to side. “Our cats are sick, and they need food. Rainsong will organise the hunting patrols, and the apprentices will gather and wet moss for the sick to drink out of.”
“You could use some from my nest!” I blurted without thinking. All heads swivelled towards me, and stared curiously.
“It just needs a good wash,” I stammered, my raven black fur flushed. Kat looked like she was trying not to laugh.
“Thank you for the sacrifice, //#REDACTED#\\.” Rainsong spoke up, and everyone turned back to her. “Now, all fit warriors and senior warriors gather around for the hunting patrol. All the remaining apprentices gather moss from wherever you can. And the kits…” Her warm eyes swivelled to the large group of kittens, who were batting at a rock.
“Keep doing whatever you’re doing.” She purred, and the group broke up.
“What about Sandykit? She’s acting as if she never went missing!” A cat muttered behind me. Craning my neck, I glared at Sparkpaw and Berrypaw.
“Show some respect! Didn’t you hear Kat?” A loud voice spat. Dawnblaze stood next to me, fur bristled, hackles raised. “Now isn’t the time for fighting. We’re falling apart, our cats are sick, and the kits are starving!”
Rainsong paced at the Highledge. “Okay, patrols. Shimmy, you can lead one, with Selena, Blizzardpaw, Jayfrost, Dappleleaf, Sunny, and Brightshadow. Swiftfire, you can lead the second group with Nightflower, Mudnose, Lilyshine, Cinnamonswirl, Sageheart, Owlpaw, and Dawnfrost.”
“Can I come?” A black and white she cat sprang up, eyes wide.
“Certainly. Daypaw, you can come too.” I watched as Daypaw’s eyes lit up, and she swaggered to her patrol. Swiftfire gave me a smile as she left, but I could see the worry in her eyes as she stared at Cakestar’s den.
I turned my back on them and found myself pacing again.
I didn’t feel bad that I wasn’t picked for the patrol. I knew that they needed the strongest cats out there to protect the Clan, and I knew that I looked a sight. Though I wasn’t sick, I couldn’t sleep for nights, and my fur was sullen and unkempt. I was in no shape to hunt for the Clan.
Yet I still felt guilt heavy on my shoulders. Trying to shrug it off, I began my pacing again.
…
“You ok?”
I looked at Nightflower, deep into her sympathetic blue eyes.
“I’m hungry, terrified for my clanmates, I have a pulsing headache, and I’m missing my family. Just like the rest of us, I guess.” I heaved a long sigh, resting my chin into my paws. “Did you eat last night?”
Nightflower shook her head.
“All the food went to the elders and the youngest in the Clan. Did you eat?”
Her eyes narrowed. I shrugged.
“You need to eat.” Nightflower mewed softly. “You’re younger than most of the warriors and it’s starting to show that you’re skipping meals.”
“I’ll eat when I feel that I can.” I murmured. “Now the Clan needs food more than ever, and I don’t want to take any food until my Clan is fed.”
The black cat sighed.
“Stop pacing, //#REDACTED#\\.” She mewed tiredly. “Just relax, okay? You’ve been on edge for a while, pacing all over camp, and you never seem able to rest.”
I looked at her, expecting hostility and annoyance in her eyes. But all I could see was a friend’s concern, clear across her dark face.
I gave in, trying to ignore the voice in my head as it screamed at me to get back up.
Odd, I thought dryly, I’ve been blocking out screams for a long time now. Shouldn’t it be easier to block out silent ones?
“What do you think?” I whispered as she sat down next to me. “Can we make it through this?”
“I don’t know.” She sighed, licking my thin fur. I tried not to wince as I bent forward to smooth her back with my tongue, and I received a clear view of her ribs jutting out painfully.
“All we can do is keep waiting.” I murmured, closing my eyes.
“Stop flicking your tail, //#REDACTED#\\. Everything will be okay.”
We lay there sharing tongues as the sun lowered from the sky, hoping that the next day would bring a brighter dawn for all of us.