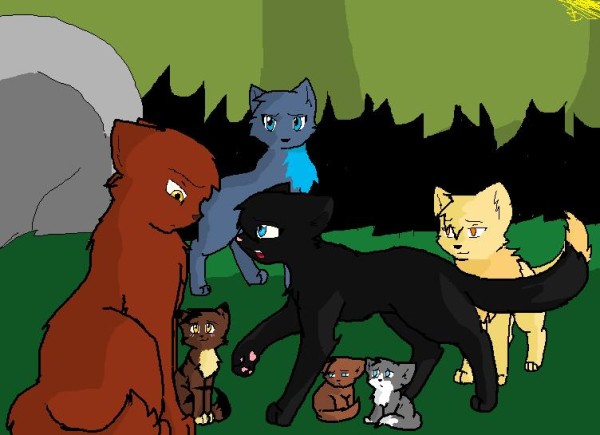 ‘Ello BC peeps. I’m Imaginarymoon, a newbie. This is my first article or post on BlogClan. Please enjoy!

Tigerclaw- *microphone falls onto Tigerclaw’s head* Oww! You stupid, clumsy, jerk! I know you did that on purpose!

Firestar: *nudges Tigerclaw away from Dustpelt* Break it up, man!

Tigerclaw: *narrows his eyes* You’re the one to talk! I always knew you were a pathetic excuse of a warrior. *flutters his eyes dreamily* Only if Bluestar wasn’t deputy in the first place. Everything would be much different. He would have chosen me as successor, and ThunderClan would actually be strong. *glancing accusingly at Firestar*

Firestar: *gasps* Is that a challenge?! *puffs out his chest and pads towards Tigerclaw*

Dustpelt: *blows a whistle* The fight is over! *he sighs* Lets just get this show on the Thunderpath.

Tigerclaw: Daaad! Are you serious!

Dustpelt: Cut! Tigerclaw! What are you doing?!

Pinestar: What? That’s what the script says!

Tigerclaw: *sarcastically says* mmmhhhmmmm! I’m sure it does.

Tigerclaw: Oh my StarClan! Who wrote this thing! *all tails point to Redtail*

Pinestar: Welcome to the series premiere of Rivals Debate Club! I’m your host, Pinestar. Today I’m with two pompous cats: Tigerclaw and Firestar. These two have been rivals for many moons. As we know, a prophecy was received by ol’ Spotty when Firestar was just a ‘paw.’ “Fire alone can save our clan.” It meant that Firepaw will save ThunderClan from Tigerstar. *rolls his eyes* Let the debating begin!

Firestar: ‘K. Don’t go to into it, you need to save your energy for all of that weeping when you lose.

Tigerclaw: Let’s start off when I was named leader of ShadowClan. StarClan made that decision. *Tigerclaw boasts cluelessly*

Firestar: *rolls his eyes* All leader are chosen that way, mouse-brain.

Tigerclaw: *glares at Firestar* Don’t interrupt me, please. So back to me being the leader of ShadowClan. I remember when that RiverClan elder mistaked me for Oakheart and told me about Bluestar’s kits! I also enjoyed the time when I, being the genius that I am, lead a pack of dogs to kill you, but that mouse-brain Bluestar saved but ended up falling off with the dog. Basically, win, win for you and me. Try to top that!

Firestar: Challenge accepted. Hey, do you recall when we fought against each other in that Dark Forest battle?

Firestar: *chuckles* I can still remember the look on your face after you failed to cut my throat. I just came at you like a boss, and sunk my teeth into your fatty neck! Then you died!

Tigerstar: I can obviously tell that I died! Don’t forget that I killed you, too!

Tigerclaw: *glance at Pinestar* Did I wi—-

Firestar: Wait, I’m not done. How rude of you to say that! First of all, I obviously have more cats on my side. Isn’t that right guys?! *Viewers nod* I brought back WindClan when they were driven out. I saved ShadowClan from Brokenstar. I saved ThunderClan from YOU. I always make bright decisions. I also brung SkyClan back from when the twolegs destroyed their territory! Now you top that!

*gasps arose from the viewers*

Tigerclaw: *glanced helplessly around* Well Lionblaze was taught by my ways. He is one of the most powerful cats around thanks to me!

Firestar: *sighs* I don’t think that’s how it went.

Pinestar: This debate is officially over! You, yes, you, can vote for either Tigerclaw or Firestar by simply going on to our website, www.rivalsdebateclub.com. *votes flood in* Yes, I see. By now you can probably guess who won. *gets megaphone* The winner by a landslide, drumroll please………FIRESTAR!! *walks down to Firestar* Firestar, do you have anything to say? *silently hands Firestar the Golden Shrew*

Firestar: This shout out go’s to Jake and Nutmeg, my parents. Sandstorm, my beloved mate, and my two daughters, Leafpool and Squirrelflight! *pants* This is for all of my kin! *thrusts the Golden Shrew into the air*

Pinestar: Well, I’ll see you next week on a new episode of Rivals Debate Clubs. Peace. Out. *drops the mic*

Firestar: You had to have the speakers right by me.

Well, I had fun writing this article, and I hope you guys enjoyed it! Tell me if you want another one. I’m open to any requests on who I should debate with.