Falconpaw discusses the claim that feral cats are the real life equivalent of Warriors. 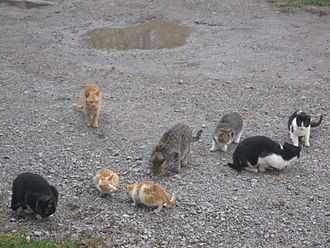 today i, Falconpaw will dive into warriors in real life!!!! so this article will be about feral felines living in the wild like warriors. you ready? lets begin. in case you don’t know what a feral cat is then i will explain; feral cats are cats who are not domesticated. if feral cats life non-domesticated for a while then they can almost never adjust to being domesticated. that’s why a warrior can never be a kittypet they cant adjust to it but kits however are another matter. young feral kits can live with humans (twolegs). also multiple studies and people just coming across feral cats show that feral cats DO NOT let themselves be handled by humans If trapped, they may hiss, growl, bare their teeth, or strike out. they hide from twolegs and run when engaged by humans. you starting to see similarities between real feral cats and warriors.

next thing, colonies. this is the fun part trust me if you thought their was similarities up there^ then you ain’t seen nothing’ yet, so i will begin by stating that feral cats do in-fact live in colonies that means we’ve got us some warrior clans. they live together frequently near food and/or shelter (the camps are the shelter). feral cats usually live in wild life not near human houses however, strays live in the twoleg neighborhoods. cats in a colony have territory and they defend it against other cats, sometimes even colonies. some colonies have a form of government called despotism it means one entity has complete power over all other members of the colony basically a leader. also in the picture included in this article i think the colony is sharing tongues. next thing is prey

feral cats do hunt which is good because that is another common thing and that’s cool, but what do they hunt? well lets see.
feral cats who live in the forest eat mice, voles, small marsupials e.g. squirrels, shrews and if it comes to the forest, rabbits they also occasionally eat birds but they have a 1/10 success rate for catching a bird. also feral cats fish yes they fish cats that dont live in the forest sometimes hunt lizards and frogs. so to conclude this article i will summarize our “real warrior clans” so we have colonies of cats who live in the wild (warrior clans) that are non-domesticated who stay away from humans or “twolegs” they will attack humans if trapped and can never adjust to living with humans. these colonies have territory that they defend against other cats and colonies(border fights). these colonies sometimes have a “leader” who has full rule over every cat. if the colony lives in the forest then the cats eat mice, voles, shrews, and birds(Thunderclan) these cats also eat rabbit (Windclan) also feral cats fish (Riverclan) additionally some cats eat lizards and frogs (Shadowclan). so there you have it real warriors.

Flamecloud takes a look back at the books that started it all.

Some of the Warrior ships I hate by Blazesoul