Hey everyone! It’s Rosefur, with the latest update on TSGN! Everyone who signed up should see their names here, along with their part.

Don’t forget to read the rules and information here if you haven’t already: https://blogclan.katecary.co.uk/2019/01/18/tsgn-update/

Besides your name you should see your teammates if you are in a group! Below that, there is a summary of the action going on in your part. If you don’t see a summary, that is because you are a later part and I have not yet added summaries for them!

Here is a link to the original writing of your TSGN scenes– https://blogclan-2.wikia.com/wiki/User_blog:RosefurBlogClanner/TSGN_Parts_(Original_Writing) Be sure to read over the original prose, it should be very helpful as it goes further into detail on the action of your scene!

Good luck, everyone! I can’t wait to see what you create. Teams, if you’d like to discuss feel free to organize and talk in the comments.

If you missed sign-ups, don’t worry! You can still fill out the google form https://goo.gl/forms/cQIB9TrJXoC7mqY83 and be contacted for the next round! You may even get to go sooner than planned if a back-up is needed.

At the beginning of every month, a new TSGN page will be released! 🙂 Stay tuned.

Finally, if the part I assigned is too long, don’t hesitate to let me know! If you ever feel like you need an extension or bit off more than you can chew, it’s not a problem at all. This is a low-key activity, and in the end it is for fun! 😀

Summary: Copperclaw trembles with fear, crying out “Badger!”. The badger comes forward, teeth brought back in a growl and with blood staining its paws. This must be its territory! Dawnmist races towards a log, with Copperclaw immediately dropping her catch and springing forward after Dawnmist. Dawnmist almost loses her balance on the log, and Copperclaw helps to balance her.  The badger catches up and flings itself onto the log. Copperclaw turns to slash at the beast, and the badger bites her tail. “Copperclaw!” Dawnmist gasps. Suddenly, a large crack split through the air. The log is going to break! The badger advances, but hits a weak point in the bark and goes tumbling into the river with nothing more than a pawful of Dawnmist’s grey fur.

Summary: Dawnmist makes one final leap to shore, exhausted. Copperclaw sits cleaning her tail, which only has clumps of fur remaining.  Copperclaw tells Dawnmist that ahead is a gorge, saying that it smelled faintly of badger, but the scent was stale.  Dawnmist follows Copperclaw through a wide stretch of moorland, breaking into a run as they approach.

Summary: Copperclaw stops, saying “Here we are.” Dawnmist reaches forward to gaze at the camp. Copperclaw leads them down a pathway, glancing back at her wounded tail second after second. Dawnmist settles in at the gorge, collapsing at a jagged rock to rest. Wondering why they were there, Dawnmist wishes for a sign from StarClan. She receives one, a single word- Unite.

Summary: Wolfpaw opens her eyes to the nighttime forest. Suddenly, a flock of birds flew rapidly through the air. What are the birds flying away from? Wolfpaw thought. She heard a menacing growl behind her and started running in the same direction as the birds. She kept on running until she smelled something peculiar. There had been cats here, definitely cats. Her eyes widened at the scent but nothing was fresh. There was a lot of badger scent. She looked around. A river was on the right, and the scent of the badger trailed right into it. Wolfpaw wonders whether to follow the trail. She jumped inside the badger den, sure it would protect her.

Summary: Wolfpaw sees Cakestar for the first time. Suddenly, Cakestar’s ears pricked and she sniffed the air, running away after something only she could see. Wolfpaw goes back to investigating the trail. She came to a gorge, where there were dens. Dawn is approaching as she finds a neat pathway to the camp. Wolfpaw meets Dawnmist and Copperclaw.

More parts coming later, put your name in the form if you want to call dibs on them early, or be a back-up for a part that falls through.


Four groups will go at a time, so the first four teams have around a month to get their parts done! When you finish, please submit it here https://goo.gl/forms/fS201Uy0OvIrRDZb2 . If you are having trouble with the form, alternatively upload your comic to an image-hosting platform such as DeviantART or Imgur and link it in the comments [NOT required if you uploaded it in the previous step].  As a note, please don’t share your completed parts with anyone outside of your teammates! It’s okay to share work-in-progress images, but I want to keep the final product you guys work on a surprise if I can! 😛

Anyone who has Part 5 or further, please don’t start your parts yet, though you are welcome to sketch and loosely plan them, as well as get to know your teammates. The reason for asking you guys not to start yet is because I want to make sure that the designs, backgrounds, etc. are consistent with the earlier parts.

That’s not all! Kat has drawn some bonus sketch references of a few TSGN characters! They should have been sent directly to the provided emails you gave in the form during sign-ups. More character references can be found here! https://blogclan-2.wikia.com/wiki/User_blog:RosefurBlogClanner/TSGN_Character_Reference

Thanks everyone for your support! I can’t wait to see how your parts turn out. 🙂

I tried drawing Kat’s design for Copperclaw in my own interpretation for future reference in the project, only to realise what my role is and what I’m supposed to do. 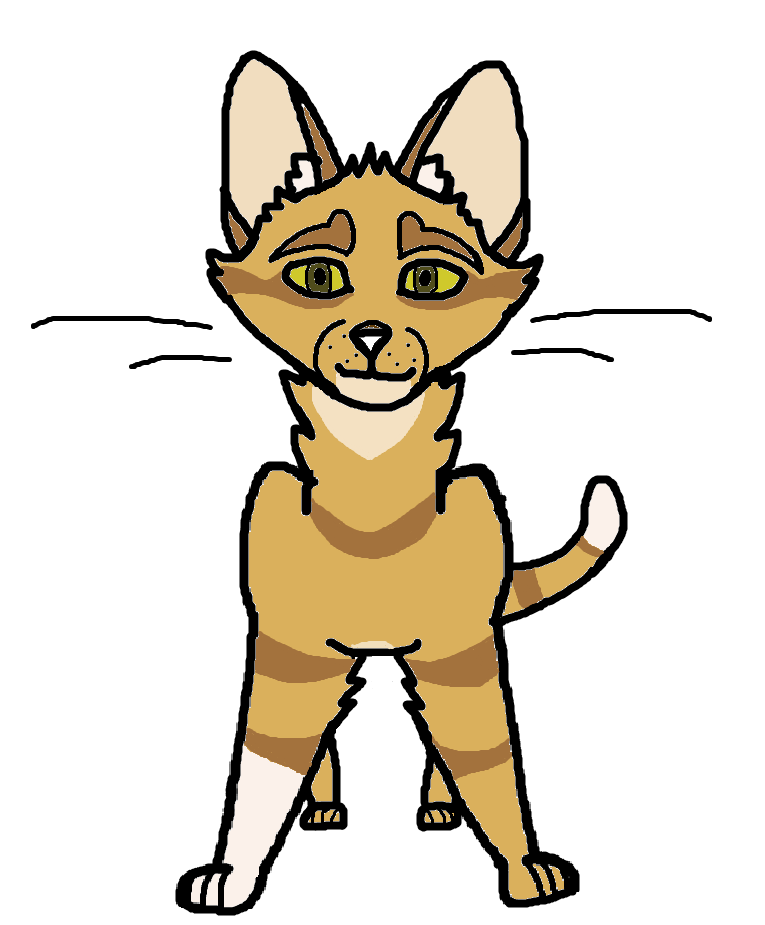 (The drawing wasn’t going to be in the final project, and won’t. The drawing/art style in the drawing is a combination of features, quirks and elements from both my style and Kat’s.)

Hello, group! If you see this (Misty Moors and Brookpaw) it’s an announcement to let you know that I am currently working on the outline for our part, and when I am done I will post it on my Scratch account and give you the link on the secret page Rosefur claimed for TSGN. I have posted my BlogClan email address on Misty Moor’s BlogClan wiki page https://blogclan-2.wikia.com/wiki/Misty_Moors and that way we can keep in touch if we need. I will finish my part as soon as I can so you two can start drawing!!! 😀

Group Three, we’re gonna need a secret page. Does anyone have one?

I signed up for this and I’m not listed

really? I specifically remember signing up. I remember debating on whether I could be a secondary artist because I don’t have an art computer program. but my computer is really bad, so it was probably a mess up on my part. google drive is really accurate 😛 I’ll just sign up again, no worries!

I thought again and decided that I actually don’t want to do this so someone else can have my part. I’m not advanced enough for this

Ooooh what about Wavey, since you saw that she’s pretty sure she signed up but her form didn’t show up? Sorry to barge in 🙂

That works for me, unless Crystal wants to do it like it says on the main post! Thanks, guys! 🙂

Hey Rosefur you didn’t answer my question from before 😛
I was saying if we are allowed to be in two parts, I can fill in for organizer on part 13. 😛
But if we can’t, its fine

Thistle of the freezing snow

Question. I need Wolfpaw’s reference for my part since I don’t know what colors her pelt is and what color her eyes are. Thanks

(っ◔◡◔)っ ♥ 𝔽𝕝𝕚𝕘𝕙𝕥𝕪 ♥
Reply to  Thistle of the freezing snow

Hi, does anyone know any good art programs that have a scrolling option for long images like the published parts? Because I have my thing ready on a piece of legal sized paper, I just need a program to post it on for my group. Brookpaw and Misty Moors, as soon as I find a program, I will share my thing with you so you can start drawing! 😀

FireAlpaca is a great program for art that is free. Paint Tool Sai is what I usually use. It costs like 60 dollars.

Hi, Group 2! I’m finally done with my part, so you can start drawing! 😀

Here is the link:

Can I have an extension till March 5th?

She has not been spotted in a long while!

🙁 there’s still hope. it’s only been a little over a month; maybe she’s just busy :’)

don’t worry about it! take your time! we were just worried because we didn’t know 🙂

I’ve nearly finished my part, I’ll give it to Misty Moors/Sundrift to edit soon.

Warriors and She-Ra similarities by Echomist