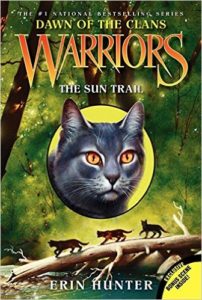 Purpleshade shares their opinion on Dawn of the Clans. Spoilers for the aforementioned arc!

To be honest, I wasn’t exactly excited to read Dawn of the Clans. I was a little disappointed after reading Omen of the Stars, and I was starting to lose interest in Warriors. However, after picking up The Sun Trail, I found myself fascinated with this new world before the clans.

The best part of the Dawn of the Clans arc was the characters. After The New Prophcey I wasn’t as attached to the characters, but something about these cats made me like them. I read about these brave warriors just trying to find a new home to build a new life, and each and every character had different motives and goals. We have three brothers, one eager to leave, the other forced to come along, and the last wanting to be just like his older brothers. (Spoiler alert) Once Bright Stream died, it set the bar for the entire series. Her death made me wonder if anybody could die. I think that since the entire arc stepped away from the Warrior Code and clan life in general the books were easier to read.

What I really liked most that there were some beautifully written grey area characters. One time you think the character is good, next you think they are bad. For example, Clear Sky was definitely the most interesting character in the series. He lost his family, and we all got to see the side effects of his grief. He becomes fearful of losing what he has, so he starts doing what he believes is nesscessary to protect his cats. But in the meantime, he starts the first battle and kills many cats. Another example of a morally grey character is Star Flower. To be honest I did not like her when she was introduced as Thunder’s first crush. Once she was revealed to be One Eye’s daughter her character went in a completely different direction. And after his death, I couldn’t help but feel a little bad for her at her reaction to her father’s death. When she became Clear Sky’s mate I was skeptical, but when she had his kits I started liking her character. Maybe it was how brave she was when she was captured, or how smart she had shown herself to be. For these kinda of characters, you like them, but you don’t know what to expect for them. I feel like these characters are the most interesting do all characters.

Another reason why Dawn of the Clans is amazing is how the Erins manage to write the whole brother v.s. brother conflict so well. We have Gray Wing, trying his best to have peace between the Tribe cats, and we have Clear Sky, who will not let his own tribemates trespass on his territory. The conflict between them is written well, and in The First Battle when the cats finally battle it out, the sheer guilt and horror that all the cats convey was so much more than the battle against Scourge and the Dark Forest. These cats killed their friends, and two siblings even died killing each other. The grief following the first battle impacts the story more than even the Dark Forest battle did. We saw the battle at the end of Omen of the Stars, yes, but we only get a short e-book in Dovewing’s perspective and quite awhile later in Bramblestar’s Storm, and then we jump straight into Alderpaw’s world. In Dawn of the Clans, the first battle actually does something to the plot besides kills characters, namely making Clear Sky regret his deeds.

The last reason that I am going to mention is the spirit cats, or earlier StarClan. The encounters between the living and the dead in Dawn of the Clans is simply amazing. Fluttering Bird’s appearances have a great impact on the brothers, and the scene where all the dead cats from the First Battle appear is saddening, mainly because the living characters are seeing their loved ones leave them forever. In the other arcs, StarClan can just pop in at any time and have a chat (ahem: Bluestar, Spottedleaf, Yellowfang, etc.), and that really makes StarClan appear less mysterious and powerful.

In conclusion, Dawn of the Clans was the best Warriors arc I’ve ever read, and I hope you all think the same.