Justifying Cinders: A bad mom or caring martyr? by Snowpuff

Snowpuff analyses the character of Sol’s mother, Cinders. Was she really that bad?

Hey everybody! It’s Snowpuff back for yet another article! Today, I will be justifying one of the worst mothers in Warriors, Cinders.

Now, unlike Rainflower and Lizardstripe, Cinders might actually have a good reason for doing what she did. Let’s track down all of the points which made her decision to leave her kits at different twoleg dens justified.

First point: Her mate left her. Cinders’ mate, Sol’s father and Cinders herself did not get along. This leads to the white tom leaving her and her kits behind. To make things worse, Cinders didn’t know how to hunt, and not being able to hunt could means something very sad, which is my next point.

Second point: She couldn’t take care of them. After being hungry for quite some time, Cinders begins to lose hope. She snaps at her kits, because she is trying to find out how to survive like this. She does not want to give them hope just for that hope to break. Knowing that she and her kits would surely starve, she makes the hardest choice a mother could make…

Third Point: The Twolegs can take care of her babies. While Cinders can not take care of her kits, she knows who can. The twolegs would provide for her kits more than she ever could, which is why she chose to dump them there. They would be safe, fed, and loved. (Not like she didn’t love her kits.)

Why giving up her kits was justified: Cinders was 100% justified in giving up her kits to the Twolegs, where they would grow up happy, fed, and loved. Remember the circumstances she was in. Her mate, their primary source of food, left her and his children to go off with some she-cat. Sure, she might be whiny, but she had a point. Would one bitter piece of pray be able to feed many mewling, starving babies? No. She can’t hunt, so she could not raise her kits like this. She didn’t leave them in the woods. That would be terrible of her. Instead, she drops her kits where she knows for sure they will live a happy life and always have food on the table, even if she can’t be in their life. Sure, it may have been hard on the kits, losing their mother, but rather than abandonment, I see a painful sacrifice. Plus, knowing that she can’t hunt for herself, she sacrificed herself to save her kits too. Instead of starving on the streets, she put them into a safe place so that they can grow up happily, while she starves, hoping that her kits would live better lives.

Do you think that Cinders was justified? Why or why not? Leave it down in the comments below! 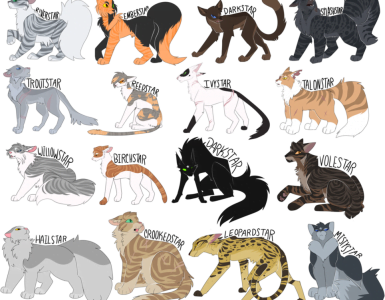 Icestripe shares their opinion on every known RiverClan leader.