The newly announced super edition now has a spoiler page! Have fun discussing and theorizing!

Graystripe served ThunderClan for many moons before retiring to the elders’ den, and was Firestar’s most trusted friend and deputy. He promised Firestar that he would never abandon his home. But as new tensions strain ThunderClan, Graystripe will need to call on all of his long history, leaving ThunderClan behind in hopes of finding an answer that might save it.”

It sounded like Barley thought of Ravenpaw as his mate. Like, we all knew that but when (SLIGHT SPOILERS) Barley’s like “Everything seemed pretty bleak after I lost Ravenpaw” page 420, Graystripe’s Vow, and then Graystripe responds, saying “I felt the same when Millie died”(page 421)
Like, Graystripe acts like they are both just mourning their mates. I’m like yes that is how it is 🙂
I feel like they have said it all without saying it.
Also the inside cover is eeeeeeepic

Well, Ravenpaw and Barley HAVE been confirmed to be canon…
I noticed the mate thing as well. I liked that part. 🙂

Yeah, I thought it was really nice. I love Barley 🙂
And Ravenpaw, too of course, but Barley is like a sweet old man

Ravenpaw and Barley are just adorable.
Just One Heartbeat

thats when you know you are a true Graystripe fan 🙂

I am definitely a Graystripe fan! 😀 He is my third favorite Warrior cat EVER, only behind Gray Wing and Turtle Tail, who is my all-time favorite.
Just One Heartbeat

Yeah, I would expect him to be a lighter gray, and maybe a little fluffier like the manga 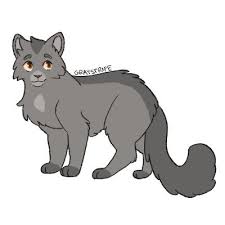 I think they are permanently there. I lovvvvvvve Monkeystar, like eat dirt Fang, Monkeystar is the leader

WarriorClan?
Me reading this comments without actually having read the book yet like: :3

its done by the same artist, so they probably just draw in that style!

Graystripe does not look like Graystripe on the cover. He looks more… purple? Me and my sister, Dawnkit/leaf, have started calling him Purplestripe! 😛

Yeah, but it makes sense once you’ve seen the book without the flap, he’s surrounded by lightning in the dark or in a storm

I read the blurb for this once before and thought that Graystripe was going to be taking a trip to his old home, but now, looking at it again, I almost feel like he’s going to go to StarClan and hope to find an answer there, then pull a Squirrelflight and hop on back to the world of the living.

Hey kate just a quick question if you can answer

Man what a mess greystripe has come home to LOL

Cadvent 2020: More Cuteness Than Ever Before

This year’s Cadvent starts on December 1st 🌟🎄We have seven days to get this party started. 🌟🎄 Tis nearly the season to be merry and, after such a challenging year, I think we need as much merriness as possible...

Open for the latest contests!

GOLDI UPDATE FROM THE FUTURE: If you chose to be contacted via secret page please click HERE! There are instructions on the page. 🙂 HERE you can find a handy-dandy little form to fill out! It is not required but...

My five favourite cats by Leafdapple

Leafdapple shares their favourite cats from the series. Which of these cats are on your list?