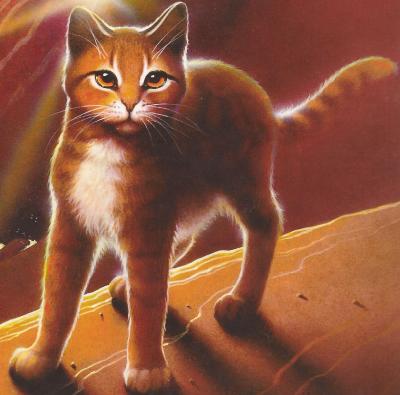 Okay, the thing about not liking Leafstar. I think she was a good leader in the gorge, despite a few questionable decisions (i.e. kittypet-warriors, having kits, letting in Sol and Darktail..). She was a clear-headed, calm, down-to-earth, reasonable she-cat who had many good ideas and lead SkyClan well for many moons. I liked her at this point. She was comfortable in the gorge, and was doing pretty well.
Then they went to the lake territories.

I think even the most devoted SkyClan fan will agree with me on Leafstar’s uncomfortableness at the other Clans. She was not prepared to handle social problems. There were multiple occasions where she just wanted to submit to the other Clans and give up, even going so far to attempt leaving and going back to the gorge. We know this didn’t happen, of course. Leafstar was persuaded to stay, and this is a win for…Twigbranch and Violetshine, because they get to see each other…? I mean, they were going back to the gorge so they can retain stability and live more prosperously. I guess there was a prophecy about all the Clans sticking together, but ShadowClan, ThunderClan, WindClan, and RiverClan had done just fine before SkyClan returned.

Honestly, Leafstar is not in good mental health at this point. She has transformed from her caring, reasonable self to a harsh, stressed cat who just wants to have some alone time. Bad things keep happening and happening and happening, most involving other Clans, and she is not capable of handling them. In the gorge, life was mostly peaceful. No controversial Clans, no prophecies foretelling of mass destruction once every few moons, only a few hostile rogues. When Leafstar came to the Clans, she wasn’t used to all the turmoil and adversity.

We’ve updated our calendar situation! As many of you know, our old calendar had to be removed because it was breaking. TODAY, we’re announcing our new system! C: The Calendar menu on the site has reappeared...

FrostFeather shares why they think Jake deserves his own story.

CATS WITH HATS AND SCARFS!! ARE YOU HAVING A FANTABULOUSOSUTASTIC DAY????? I SURE HOPE SO!!

LOOK ITS A GUINEA PIG CAKE TO SHARE WITH PATCHES!!!! <3